Nutils is a MIT licensed package for Finite Elements applications.
Here you can find some examples how to use it
http://www.nutils.org/
Nutils by example
Posted by rastudillo at 5:49 AM 7 comments:

If you want to read lines from the standard input until End-Of-File (eof), you can use the sys.stdin, for example:
Posted by rastudillo at 3:27 AM No comments:

Print automatically adds a new line after printing its input variables and/or constants. To avoid this new line in Python2.6+ you can add a colon "," (without quotes) after the printing command, here is an example In Python3, you can add the option end="". Example: Remember that from Python2.6+ you also can use the Python3 print command, adding
Posted by rastudillo at 3:21 AM No comments:

In Python, it is possible to create a one liner code to swap the value of
two variables, this is how

Posted by rastudillo at 7:17 PM No comments:

The first time I used the command spy to show the sparse pattern of a sparse matrix, I wasn't satisfied with the result, 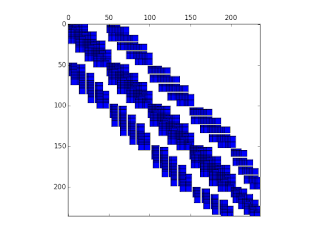 as a person who are used to Matlab plots. In this figure isn't easy to see the sparse pattern of the the matrix. After reading about the options available in the spy command, I found the option markersize. Changing the value of this parameter we can obtain a more familiar plot. 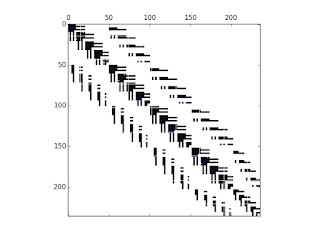 This is the code,

You can find all the code published in this blog in github, please visit https://github.com/astudillor/codes_python_blog. Feel free to use and modify this code.
Posted by rastudillo at 6:50 PM No comments:

Checking the type of a variable or object

Recently, I came across to the problem of writing a function that behaves differently according the type of its single input parameter.  Due the fact that Python is a dynamically-typed language, this problem does not look  too easy to me at first glance. But fortunately, Python provides the build- in command  isinstance. This command receives two parameters, the first one is a object and the second is a class or tuple of classes. Then return  true is the object is an instance of the class or of the classes in the tuple. Let us exemplify the use of this function with a routine that print the type of its input parameter,

Of course the first post of a blog about programming in Python have to be hello world in Python :)
This is the file helloworld.py
to execute this file
Two elements of the helloworld.py script. First, the command print, this command write to the standard output the parameters given. These parameters can be variables, objects (as we are going to discuss in a later post), or as in this case constants. The second element is the first line starting with the charcarter '#'. In Python every character in a line after the symbol '#' is considered as a comment (python interpreter will ignore this). Particularly in our example we have the following comment
This comment is not mandatory, however, it is used if we want to run helloworld.py as an standalone executable. First, we can give execution rights to the file helloworld.py using chmod
From now on, we only have to type,
to execute the helloworld.py.
Posted by rastudillo at 9:46 AM No comments: